skip to main | skip to sidebar

Leopold and Mila
Part One: The Stranger's Daughter 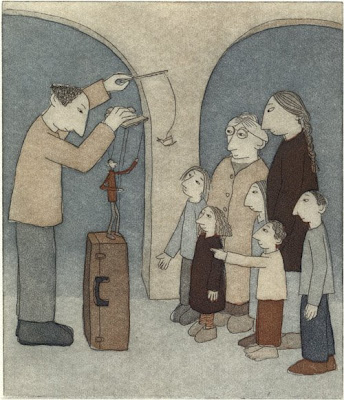 It was the beginning of fall when Leopold set out to seek his fortune. He went from town to town, farther and farther away from home. 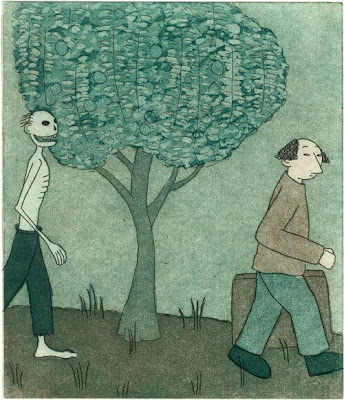 One day, a stranger called his name. 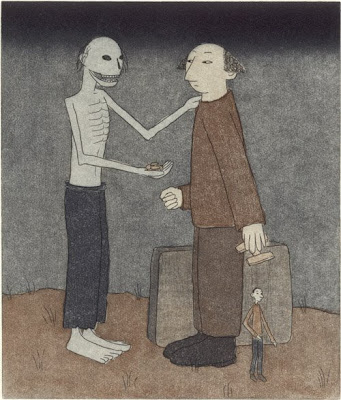 He tried to buy the puppet, but Leopold refused. 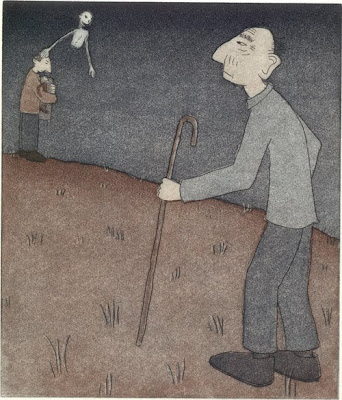 He tried to take it. An old man happened along and the stranger disappeared. 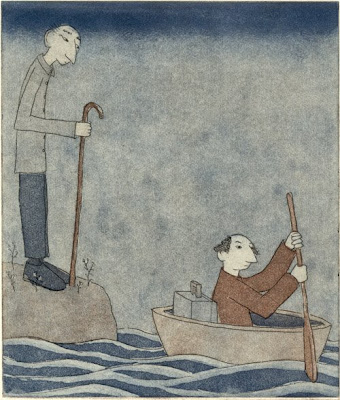 The old man gave Leopold his coracle so he could escape. 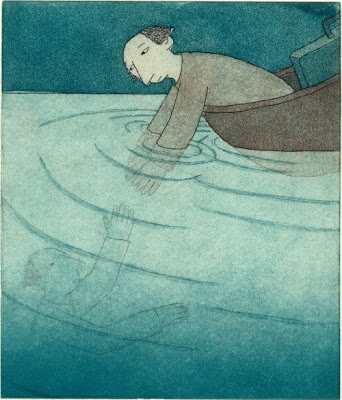 The wind stopped. Everything was still. The water was very deep and very clear. Leopold thought he was dreaming. 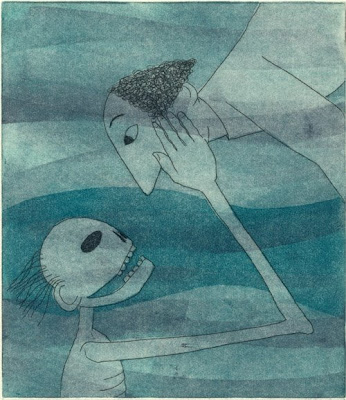 He fell in. The stranger had tricked him. 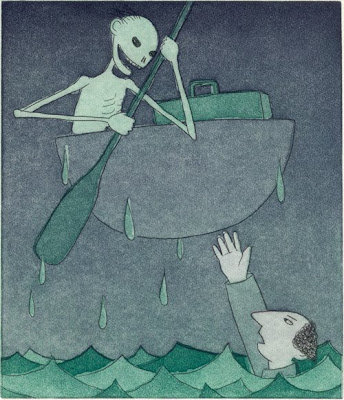 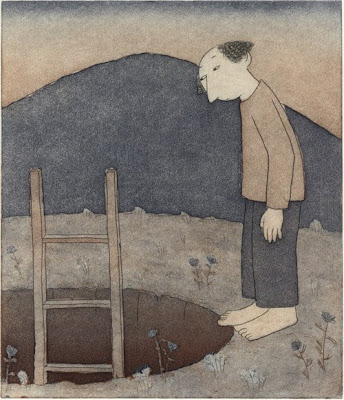 Leopold chased after him. The boat left a trail of water that led to a hole. 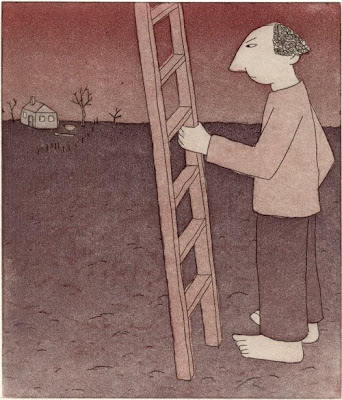 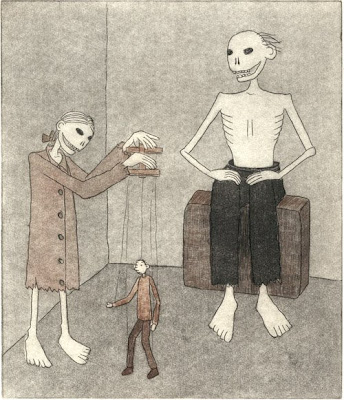 He creapt quietly up to the window and looked in. The stranger's daughter loved Leopold's puppet. Leopold watched her for play sweetly for a long time. Then he turned around and climbed slowly back up the ladder, empty handed. 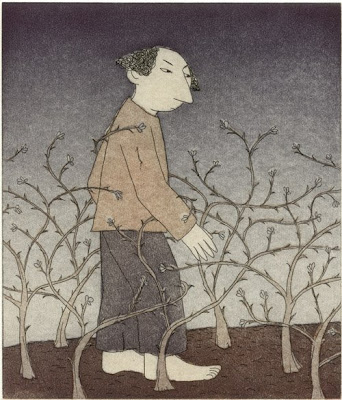 Leopold had nothing. He started walking. His path disappeared in a thicket of brambles. 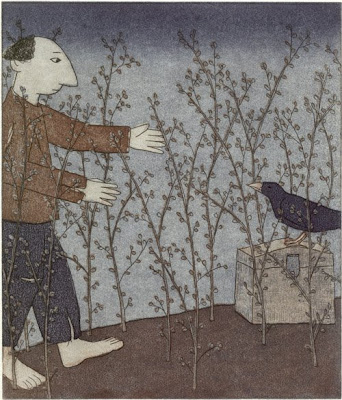 In the middle of nowhere he found an old wooden box. His heart was pounding. 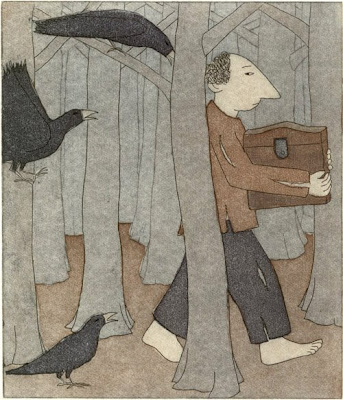 Three crows hectored him for miles. When he finally got to a quiet clearing and opened the box, he was delighted with what he found. He set up a comfortable camp and stayed there through the winter, resting and learning to play the concertina. 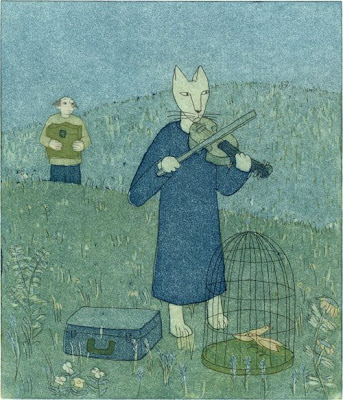 Come spring, he set out again. One morning he heard sweet music coming over a hill. That was how he met Mila. 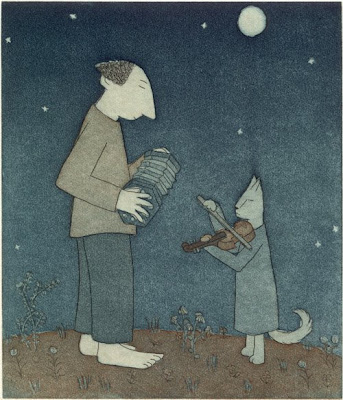 They sounded good together. 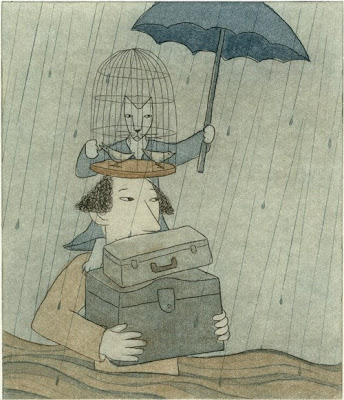 She was on her way to live with her aunt, and Leopold decided to accompany her. 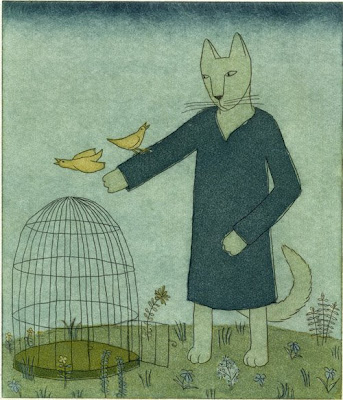 They got to her aunt's house, but she had moved away, nobody knew where. Mila had two delicious birds for her. She let them go. 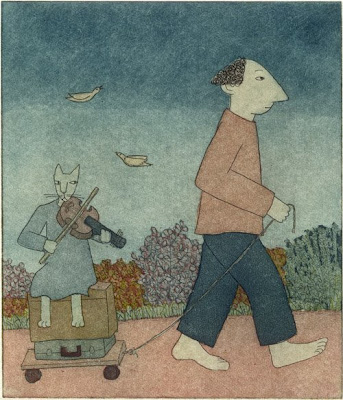 The weather was good for walking. Leopold and Mila set off down the road.

About Leopold and Mila

Leopold and Mila is a picture story with twenty etchings, written and illustrated by Daniel Krakauer.

A typical image is printed from three aluminum plates: one plate for black lines and two plates for colors. Each print measures 7"x8", and is printed on Hahnemuhle Copperplate etching paper. The aluminum is etched in a copper sulphate mordant. Each plate is hand inked and printed in the traditional manner. Etching techniques used include hard ground, aquatint, relief printing, and drypoint.

All images are available as limited edition handprinted etchings. They will also soon be available as archival digital prints. Please contact me for more information.


All image and text copyrights are owned by Daniel Krakauer. Images and text may only be used for commercial purposes with permission of the artist.